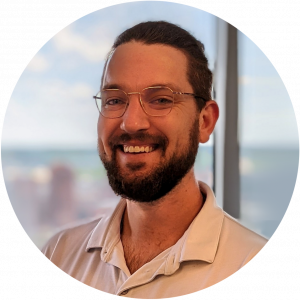 Bobby Moran has always wanted to run his own media production company, but he didn’t always have the experience he needed to make his goal a reality—that is until he found Apprenti, a nonprofit tech apprenticeship program that prepared him to enter the tech workforce.

Bobby, who refers to himself as being neurologically divergent after being diagnosed with bipolar disorder at 19, attended Ball State University in Indiana. He earned a degree in a major of his own design, human organization and communications, and spent five years as a creative brand consultant. It was during these years that he began to examine how he could reshape his career path to achieve his end goal.

As he looked toward the next phase in his career, he took a step back from the corporate world, working in the parks system in Hamilton, Ohio. It was in Hamilton where he first learned about Apprenti and the opportunities that can come from an apprenticeship, thanks to Jewish Vocational Services, a community-based program that provided him with career coaching.

As he discovered more about the Apprenti program, he felt it was the logical next step for him. In 2019, with the encouragement of program staff and the drive to achieve success, he applied and was accepted into an apprenticeship with E.W. Scripps Company. His apprenticeship journey began at MAX Technical Training, an Apprenti partner that provided him with classroom instruction, where he learned foundation skills such as reading and developing code and DevOps.

When he began on-the-job training, he connected with the person who would become his manager and mentor at the E.W. Scripps Company. At Scripps Bobby’s career took off thanks to his manager’s on-the-job mentorship—built on the philosophy of “go slow to go fast”—and the continued career development support from MAX Technical Training staff.

In 2020, after graduating Apprenti, Bobby was retained by Scripps to manage their content management system used to deliver digital news. He is now responsible for managing 47 local media delivery applications, the quality assurance team that tests these applications, and local site directors. What’s more, his supportive co-workers are continually helping him expand his skill set. Right now, he’s in the process of learning how to design his own android applications!

Go to the Success Stories page

It’s never too late to start a new career path as long as you’re willing to work hard and you are open to exploring new learning opportunities. An apprenticeship program can definitely help change your trajectory, but you have to be committed to achieving success. Jump in headfirst and start learning!

My advice would be to be patient with potential apprentices and employees who are neurologically diverse. While sometimes their energy may seem reserved or they may be introverted, most of them have an incredible story and are just looking for the right place to share their many talents.

PIA collaborates with employers and apprenticeship intermediaries to design inclusive apprenticeship programs that meet employer talent needs and enable people with disabilities to gain credentials and skills to succeed in growing industries.